Attack of the Giant Pretzels

The Isthmus by Kyle Nabilcy | Nov. 17, 2016 | Batch Bakehouse produces one of the class acts of the local megapretzel scene. When you taste it, you’ll understand why this big Bavarian-style pretzel is on the menu at Dexter’s Pub, the Coopers Tavern and One Barrel Brewing.

The tradition of huge pretzels and pints of beer is a time-honored one, owing its original popularity to German festivals and biergartens. The Speyer Brezelfest in Speyer, Germany, has been pairing the two since 1910, but the timeline goes back centuries farther. Wisconsin’s history of German immigration means you won’t have to look very far to find a huge soft pretzel, browned and salt-studded, shining with butter.

These days, pretzels are migrating from ballparks to bars and proper restaurants. Where can you go to get the biggest and the best?

Batch Bakehouse produces one of the class acts of the local megapretzel scene. When you taste it, you’ll understand why this big Bavarian-style pretzel is on the menu at Dexter’s Pub,  the Coopers Tavern and One Barrel Brewing.

Dexter’s offers a seven-ounce version that’s big enough for two, believe me — but there’s another that tips the scales at just over a pound. The beer cheese dip here is superb and the peppadew pepper mustard was lovely, with a good bite. At Coopers, the pretzel is served with a choice of either Belgian beer cheese dip or a Guinness Stout mustard. And at One Barrel, it comes with mustard, or, for an extra $2, a cup of Velveeta cheese dip.

Or, go straight to the source: Batch sells them on Tuesdays, Thursdays and Sundays at its storefront on Williamson Street.

I found a very large pretzel at Viking Brewpub in Stoughton, served with a pretty decent beer cheese dip. The pretzel comes to Stoughton via Martin Brothers, a food service supplier out of Iowa. Ultimately, this wasn’t that good of a pretzel — it tasted an awful lot like an egg-washed hot dog bun. Seriously large, though. Two adult human hands across.

The big pretzel at State Street Brats is cheap and comes out fast; but it’s not substantially different from your standard ballpark or gas station pretzel. There’s a condiment bar full of mustards, at least. At only slightly more than half the width of the Viking pretzel, it’s among the “smaller” giant pretzel options.

The large pretzel at Wisconsin Brewing Company Taphaus on State Street comes swinging from a metal banana hook. If nothing else, the presentation keeps this beast from intruding on your neighbor’s elbow space at the bar. It has great visual presence, but it’s dry, overly dense and bland. The bartender told me it comes frozen and they bake it. Where it truly goes all sideways, though, is the gritty and broken beer cheese sauce, which I think might just be old beer cheese soup. My advice: Keep walking.

It’s all the way to Middleton, but World of Beer makes its own pretzels (albeit at a central location for the chain’s multiple locations). It comes crisp and browned, basted with a lot of butter, accompanied by a beer cheese dip that swerves briefly but pleasingly over the line into industrial nacho cheese territory. The whole-grain mustard is fine, but it’s the cheese that seals the deal. This one comes to the table on one of those banana hooks, too, which might make your table feel like a group of velociraptors being fed a goat. It’s great.

Freiburg Gastropub, the German-focused pub on Monroe Street, offers a housemade, dark brown, very Old World-y pretzel with a bit of crunch to the exterior and a delicious balance of salt and butter. An enjoyable housemade sweet mustard accompanies it, but challenge yourself with a dollop of the very hot Dusseldorf from the crocks set out around the dining room and bar. In addition to a brand-new beer cheese option, there’s also an obatzda cheese spread — a Bavarian soft cheese/butter/paprika blend of some renown — that isn’t found around here very often. But the mustards are enough for this megapretzel. That’s the old-school way to do it. 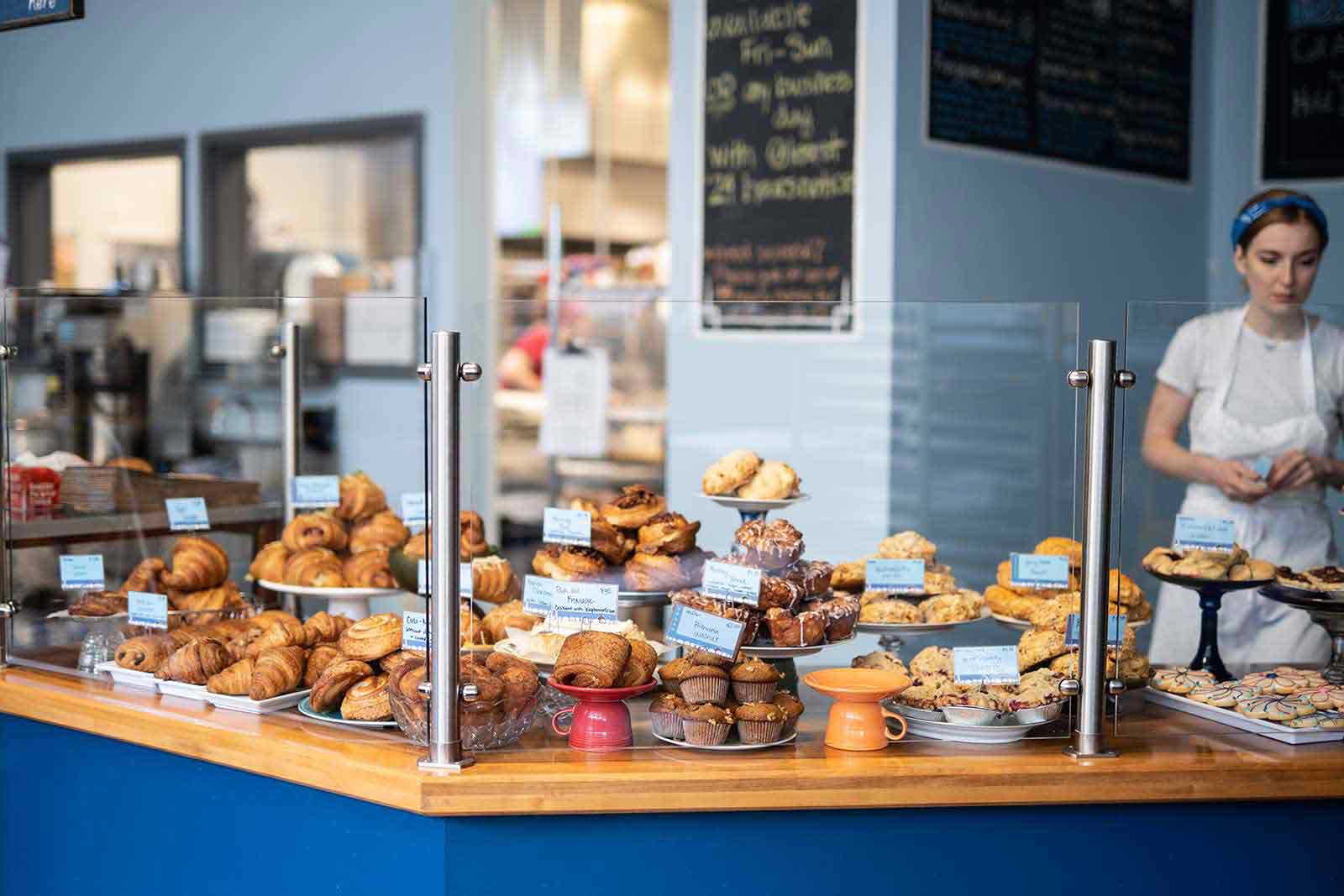